The Whitney Biennial is an annual art exhibition held at the Whitney Museum of American Art presenting works by new and young American artists. Over the years, it has gained a reputation as being one of the art world’s most popular events, and a leading show presenting art that is political, contemporary, and evocative. While the Whitney has often been criticized for the show’s lack of diversity in recent years, the 2017 biennial was widely hailed for breaking from the mold. The show’s inclusion of a host of artists of color and works exploring life within marginalized communities, as well as the choice of curators tapped to lead the biennial was praised by many in the art world. Co-curated by Christopher Y. Lew and Mia Locks, both Asian-American artists and curators, the biennial explored a range of themes, including Black Lives Matter, the Puerto Rican debt crisis, the student loan bubble, and censorship. 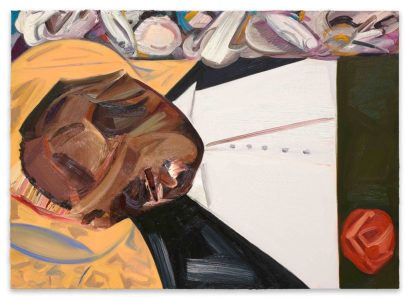 For all its diversity, however, the Biennial was roundly criticized for what became the most well-known and controversial piece in the show. Dana Schutz’s painting, “Open Casket”, an abstract rendition of David Jackson’s infamous photo of Emmett Till’s battered body in his casket, became the focus of a variety of thinkpieces, open letters and petitions. Essays appeared on multiple websites, including an extended “conversation” between multiple pieces on Hyperallergic, both in support and in criticism of Schutz’s work. Many remarked on Jackson’s photograph, and how Till’s mother, Mamie Elizabeth Till-Mobley, had deliberately left his casket open, saying “Let the people see what I’ve seen”. The image, many thought, was for Black America, and should not have been co-opted by Schutz, a white artist. Schutz’s positionality in relationship to both Till, and Carolyn Bryant, the white woman he was murdered for allegedly whistling at, were key points in many of the essays. Artist Hannah Black posted an open letter calling for the painting’s removal, even urging its destruction and Black artists in both the United States and Europe signed onto her letter in agreement. The opening weekend of the biennial brought Parker Bright and a friend out in protest, standing in front of the painting for hours at a time obscuring its view. Bright, a young African American artist and curator, wore a homemade T-Shirt that spoke for him. On the front, in a crossed-out circle, read NO LYNCH MOBS. The back, visible to museum-goers as he stared intently at the painting in silent protest, read BLACK DEATH SPECTACLE. His associate, Carlie, stood in front of the painting’s exhibit label, barring visitors from reading Schutz’s name, the title of the painting, and the curators’ interpretive text accompanying the piece. When asked about his protest, Bright asserted that he didn’t think white artists should profit off the pain of black people. He pointed out that perhaps Schutz thought she was, through her work,  participating in a conversation, but it read as appropriation. Bright and his friend were firm, passionate, and determined. I initially was hesitant to speak with them, not wanting to disrupt the silent protest, but wanting to learn more about what he thought. While I respect Parker’s view and his protest, I couldn’t help but find myself agreeing with some of the points made in Coco Fusco’s take on the controversy. While this isn’t necessarily a case of censorship as the term is defined, the conversation and protest sparked by Schutz’s painting makes me wonder how to move forward in discussions around race. Of course, the point that carries through from many Black artists, curators, and museum-goers, is that this is a conversation to be directed by and for Black folks, and “Open Casket”, no matter Schutz’s good intentions, is an unwanted and uninvited participant.

Schutz’s painting was not the only work to address violence against black bodies, though the controversy surrounding the piece may have overshadowed other work by actual artists of color. The show contained a number of works by Henry Taylor, an African American painter with a penchant for depicting scenes of black life. One of Taylor’s paintings, mentioned constantly in contrast to Schutz’s “Open Casket”, renders the June 2016 shooting death of Philando Castile, killed by police in Minnesota.

Henry Taylor, “THE TIMES THEY AIN’T A CHANGING FAST ENOUGH”

The painting, “THE TIMES THEY AIN’T A CHANGING FAST ENOUGH”, presents an image of Castile as he lay dying in his car, pulled directly from the Facebook live video his partner recorded immediately after the shooting. Taylor’s work is one floor above Schutz’s and, in contrast to “Open Casket”, featured alongside both his own paintings as well as African American photographer Deana Lawson’s work, adding greater context and gravity. Her photographs, as well as the rest of Taylor’s work aside from “THE TIMES THEY AIN’T A CHANGING FAST ENOUGH,” depict bla

ck folks in their homes and communities: a group of young men, tattooed and throwing up gang signs, an older shirtless man holding a rifle, a young woman lying nude on a carpet staring alluringly at the camera, and a young man holding up his baby. Lawson and Taylor’s work here appears in conversation, two black artists offering commentary on black life, complicating and confronting stereotypes. 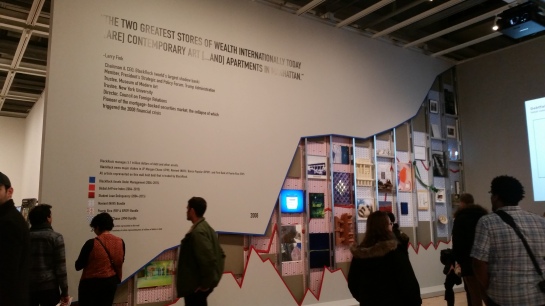 Also present at the Biennial were a series of works openly criticizing the rampant capitalism within the art world. Occupy Museums, a collective borne out of the Occupy Wall Street movement of 2011, aims to resist the influence of elite investors and institutions on the arts.  Their website proclaims, “We occupy museums to reclaim space for meaningful culture by and for the 99%. Art and culture are the soul of the commons. Art is not a luxury!” Months before the biennial, the collective put out a call for work that explored issues around debt. Artists contributed works around the student loan bubble, as well as credit card debt. 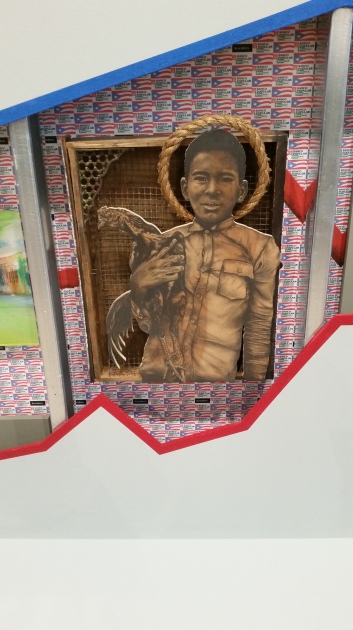 A group of Puerto Rican artists, including Yasmin Hernandez and Adrian Viajero Roman submitted a bundle of works exploring and criticizing the debt crisis in Puerto Rico. The Whitney Biennial coincided with Citicien, a series of art works on display at the Clemente Soto Velez Center commemorating the 100th anniversary of the Jones Act. Citicien, a collaborative project by the collective Defend Puerto Rico, is curated by Roman. The title is a play on the word citizen, substituting in the Spanish word cien, for 100. The exhibit is a response to, and reflection on, the Jones Act of 1917 which conferred US citizenship on Puerto Ricans born on the island. Many of the artists in the Biennial also contributed work to Citicien. Both exhibits offered commentary on the fraught colonial relationship Puerto Rico shares with the U.S., specifically the limits of citizenship, and what PROMESA, a newly introduced “relief” bill, means for the island with its proposed wage cuts and school closings. Along with those works of art are others exploring student loan debt as well as the housing bubble. Each image rests on a wallpaper background depicting the financial institutions to which the island and students are indebted, including the logo of student loan manager NAVIENT, as well as Banco Popular. Debtfair’s focus on debt is meant to be read in conversation with a list of the Whitney’s sponsors, highlighting the contradiction and conflict of arts and culture and capital.

This year’s Biennial is the first to be held in the Whitney’s downtown space, a sleek glass structure overlooking the popular High Line, the Hudson River, and the crop of high-end businesses that have sprung up in the Meatpacking District over the years. As the Occupy Museums collective asks, what does it mean for capital to be such a central part of the creation and display of art? It is worth asking if diversity on the walls of a museum is worth more or less than diversity within its spaces, among its audience. The biennial may have attempted to respond to issues of race and violence in America today, but the response to the Schutz painting, as well as the overall problem of who visits art museums, still problematizes what we think we mean when we say diversity. In the months following Michael Brown’s murder at the hands of police in Ferguson, Missouri, museum and art bloggers took to twitter and other social media outlets to respond, reflect, and unite. Thus, #museumsrespondtoferguson was born, and museum and cultural spaces were urged by museum professionals and others to contextualize the moment historically, and offer space spaces for communities affected.  Of course, an art museum functions differently than a history museum, offering renditions and interpretations of history that don’t rely on the same set of museum best practices. Art museums can offer history, as well as the present, in a very different way than history museums are charged to. The charge to present “both sides” or to “be neutral” is missing from an art exhibit. An artist’s version of history does not need to conform to a textbook or uphold an archive or historical collection. And yet, both art museums and ones more reliant upon the archive to give a history come upon the same issues with regards to the question of who tells the story? Is Schutz’s work a valuable part of the conversation around racism and institutional violence? Is Taylor’s painting of Philando Castile a more thoughtful meditation on police brutality against black bodies given his own positionality? Can the museum be a radical space for artists of color to respond to issues around colonialism and exploitation, even as it benefits from both? Does the appearance of“Open Casket”, the work of Lawson and Taylor, and the Occupy Museums collective within the Whitney Biennial constitute a step forward, or another kind of meta-spectacle? These questions circle back to key ones around representation and diversity in museum spaces, and making them welcome to artists and visitors of color. They require negotiating how we, as historians and artists, contextualize history, and historicize the present in all its messy complexity, and asking honestly, who participates in these conversations and who guides them?

Christina Sharpe, “In the Wake”

The sheer number of artists of color included in this year’s biennial can be seen as a step forward, but we must also examine the context within which their art is presented and understood. Further, still, we must grapple with how white artists respond to and resist white supremacy, and who gets to decide if they are doing so “correctly”. Are museum spaces, with their attendant capitalist interests and wealthy supporters and visitors, the right or best space for these conversations? I believe that the museum has the potential to be a truly radical space, and many cultural institutions and the POC and allies who work within them are attempting to steer these conversations. That being said, the answers to these questions, and others, are not easy. We must revisit them as artists, scholars, and museum workers constantly, accounting for context, intention, and audience response.

Art, like history, is messy, and often defined by dominant ideologies. A museum exhibit is an imperfect interface to re-think and “re-create” history, but holds a kind of potential that textbooks and higher education classes simply do not. The democratic aspect of “open space” is what sets the museum apart, and questions of access lie at the heart of how we challenge the status quo.